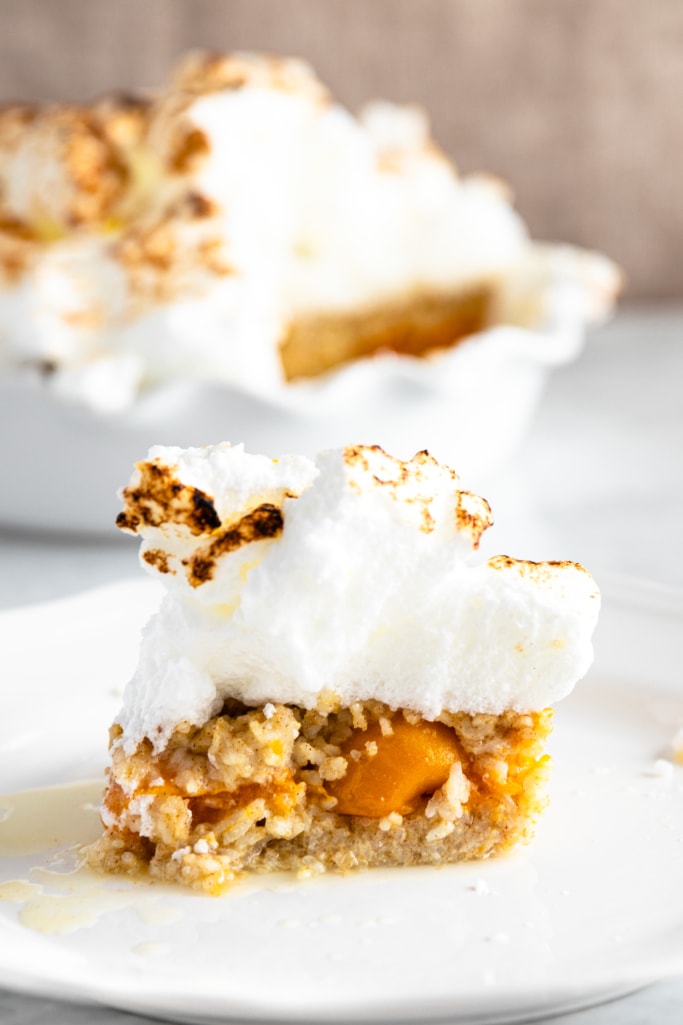 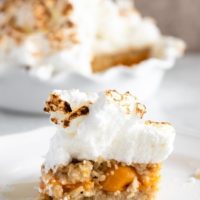 Czech Baked Rice Pudding with Apricots is a casserole of sweet, buttery rice scented with vanilla and cinnamon, layered with preserved apricots, and topped with dramatic-looking browned meringue peaks.

In the Czech Republic, especially in the countryside, where I grew up, it is normal to serve a sweet entrée at lunch or dinner.

You typically start with a savory soup followed by, for example, a plateful of golf-ball-size dumplings filled with strawberries (or blueberries or apricots) and sprinkled with powdered sugar, grated quark cheese and melted butter.

Other options might be baked, paper-thin crepes filled with marmalade; yeasted dough buttons swimming in a pool of crème anglaise; bread pudding layered with grated apples, raisins and cinnamon; or potato dumplings coated with ground poppy seeds and sugar, and topped with melted butter.

It’s a complete sugar overload across the board—not to mention a calorie bomb—yet mouth-watering and very satisfying, especially when you’re a kid.

The ingredients in this recipe are easy to find. Most are kitchen staples:

How To Make Baked Rice Pudding

Whisk the egg yolks with sugar until the mixture is light and frothy. Then add this, along with butter, cinnamon, and vanilla to the cooked rice.

Layer the flavored rice and the apricots in the baking dish, and stick into the oven.

How To Make Italian Meringue Topping

While this Czech rice pudding is certainly delicious on its own, a whipped Italian meringue [muh-RANG] topping with graceful swoops and peaks truly elevates the dish.

To make Italian meringue at home, start by making a sugar syrup. That’s simply a matter of heating sugar and water in a saucepan. While the sugar syrup cooks, beat the egg whites in a stand mixer.

When they’ve doubled in volume, slowly pour the sugar syrup into the egg whites while mixing.

Continue mixing until you have a crisp white, shiny meringue that forms stiff peaks when you lift the whisk out.

It’s best enjoyed immediately after it comes out of the oven. However, the rice pudding also tastes great cold or at room temperature. Store in the refrigerator, covered, for up to two days.

In America, this would be considered a dessert and probably served in small portions, but I leave it up to you—there is nothing wrong with eating it the Czech way, piled on.

Can I Make Rice Pudding with Leftover Cooked rice?

This is a great way to use up leftover rice. As long as it’s plain, you can add the cinnamon, sugar, vanilla, and eggs to cooked white rice and proceed wit the recipe as written.

Sweet entrées are def a Czech thing. But everyone can enjoy them! Here are more entrées that are so delicious:

Check out all of my sweet recipes Czech and otherwise, including American favorites like Pumpkin Pie.

Of course, we don’t only eat sweet meals in the Czech Republic. I have plenty of traditional Bohemian recipes that are savory too, find them here.

Do you think sweet entrées are strange? Did you make this Czech baked rice pudding with apricots? What’s your favorite dessert?

A casserole of sweet, buttery rice scented with vanilla and cinnamon, layered with preserved apricots, and topped with dramatic-looking browned meringue peaks. 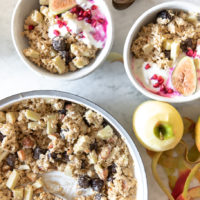 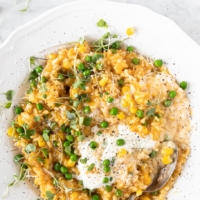 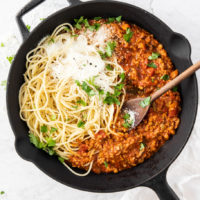 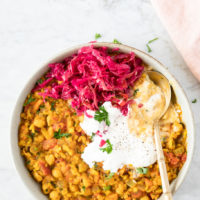 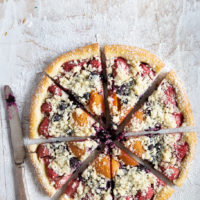